These full-flavoured loaves have been very much a firm favourite in our house for many years and while it is great as a non-sourdough bread, the sourdough version is seriously terrific. Of all the flavoured breads I make, this is one I make more than any other. 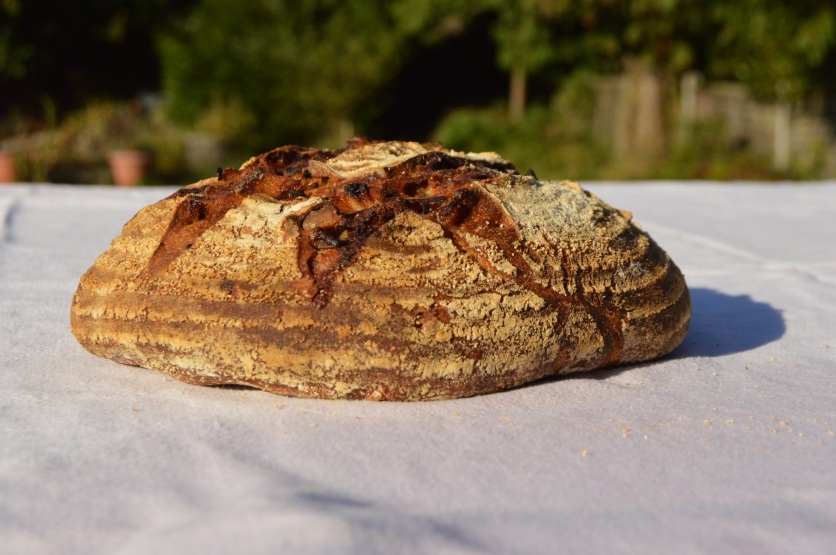 The recipe guidelines for the non-sourdough version are below the main recipe.

Very high up in my list of ambitions in life is to have a bake of mine sold commercially; of all my bakes this is the one that would be top of my wishlist to go out there for folk to buy, ideally by an artisan bakery so that the flavours are just how it would taste if making it at home.

Well, it doesn’t harm to dream!!

I adore the flavour combination of walnuts, pears and blue cheese, especially in a salad, so I developed this particular recipe to reflect these flavours.

The Gorgonzola comes through without dominating, but the tangy flavour of the sourdough and the sweetness of the pear shine. Combined with small bursts of walnuts, you get what I think is a stunning bread.

Very few of my recipes are set in stone and I get much joy tweaking my bakes from time to time. For this bread I occasionally use different blue cheeses, reducing or increasing the amount depending on the strength of the cheese, but I would tend to err on the side of caution in terms of the cheese!

You can blitz the walnuts to a powder and incorporate them with the flour at the start, but this does tend to make the bread take on a purple tinge: I think it can look quite attractive but I know how divided opinion can be! So to avoid purplification, work in fairly finely chopped walnuts once the dough has been kneaded.

I sometimes make these without the walnuts – as in some of the pictures in this post – and it still tastes excellent.

From time to time I sprinkle grated cheese on top of the loaves just as they go into the oven: the crisp cheese layer you then get is wonderful!

Fuller details on sourdoughs, including making a starter, are in my sourdough post.

As the basis of a light lunch:

For a simple lunch or supper, try a toasted slice of this bread topped with a poached egg, served on a small bed of lightly dressed rocket and radicchio with a few crisp bacon lardons and some toasted walnuts: the oozing yolk as it drips over the toast and salad, with the saltiness of the bacon is wonderful.

(1) Make up the dough: mix the flours, salt, starter and most of the water together, by hand or using a machine with a dough hook attached, adding more water until you get a soft dough with no visible flour remaining. Knead for 15 minutes or so to give a smooth dough that has a nice level of elasticity: the gluten will develop further during its slow first prove. Work in the walnuts. As an alternative to traditional kneading, use the stretch & fold method (detailed in my link above for making sourdough).

(2) Place the dough in a large bowl, cover and leave to rise for a few hours at room temperature to start off the fermentation before covering and refrigerating for about 24 hours or until risen to about twice its original volume – to be honest, a rise of a little less than that will work very well. The flavours build up during this slow rise will be amazing in the final bread.

(3) Split the risen dough in two pieces and pat each into a rough and fairly large rectangle (about the length of a rolling pin – but this is really just an approximation!), with the shorter edge facing you. Crumble half of the Gorgonzola and half of the chopped pears over the surface, leaving a little border around the dough edge. Gently pat them into the dough so that they don’t go overwhere when you roll it up. 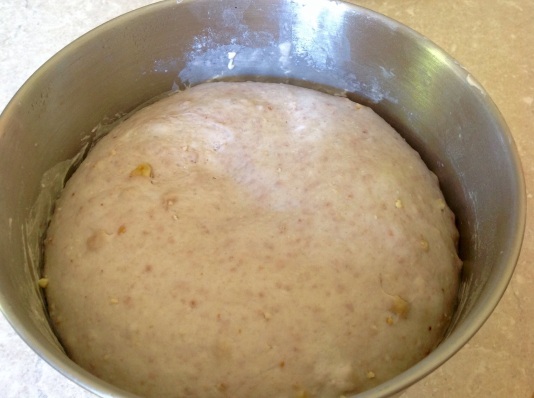 after a long rise in the fridge

flattened out with pear and Gorgonzola on top

(4) Fold over the edges a little and roll up fairly tightly to form a long sausage-shaped dough. Turn the dough over and pinch along the seal down the length of the dough. 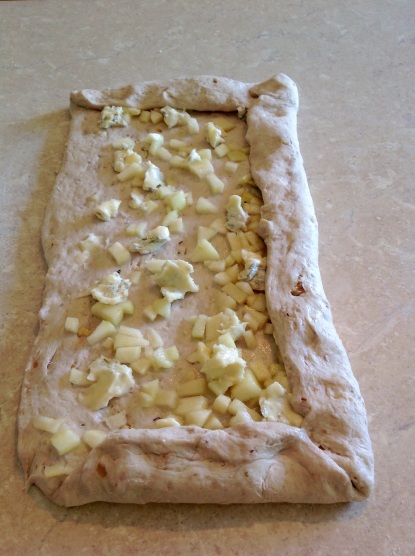 fold in the edges a little and then roll up

pinch edges together to form a long sausage shape

(5) Pat the top down with your hands or with a rolling pin to flatten it a little and bring the bottom half over the top, to give a fairly neat rectangle. Then roll this up from the bottom to give a loaf shape. Place in a well floured banneton. Repeat with the other piece of dough and the other half of the Gorgonzola and pear. NB: alternatively, you could just knead the Gorgonzola and pear gently into each piece of dough, bringing the dough together to place straight into the bannetons. However, the dough can get quite sticky and hard to handle this way. 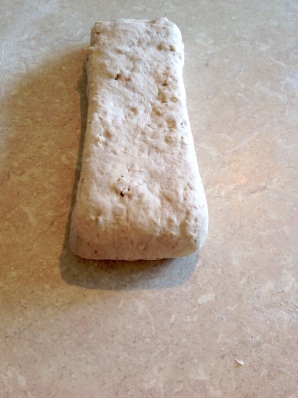 flattened out and folded over itself

rolled up and ready to put into a banneton to prove

(6) Cover with clingfilm or place inside a large plastic bag and leave to rise at room temperature until well risen – the dough should just rise above the top of the bannetons, which can take between 4 hours and half a day, depending on the room temperature. About an hour before the dough has risen enough, preheat the oven to its highest temperature and place thick baking trays or baking stones on the shelves to heat up (the loaves will be turned out onto these). Place a solid roasting pan on the bottom of the oven.

(7) When you are ready to bake, remove the very hot baking trays/stones from the oven and turn the dough out of the bannetons and straight onto these. Working quickly, make slashes a little way into the dough with a sharp blade.

(8) Pour cold water into the roasting pan to create a lot of steam and then put the dough into the oven, fairly high up. Bake for about 10 minutes at this highest temperture. Turn the temperature down to 220°C (fan) and bake for a further 30-40 minutes. The loaves are ready if they sounds hollow when you knock the base of the loaves. Cool before cutting and eating.

Make up the dough as above, omitting the starter, increasing the flour to 730g, mixing 5g easy-blend yeast with the flour at the start. Mix in 400ml water, adding more if necessary to give a soft but not too sticky dough. Knead as above and then put the dough, covered, straight into the fridge for its first rise overnight or until more or less doubled in size.

NB: this might not seem a lot of yeast but it is plenty for the slow rise.

You then incorporate the Gorgonzola and pears, before shaping as above. The shaped loaves will only need up to a couple of hours to rise at room temperature before baking as above.

Take one of the pieces of dough after the first rise and repeat as for the large loaves, until you form the sausage shape. Gently roll this dough further to make it longer and thinner before cutting into 12 portions and popping into mini loaf tins. Cover and leave until risen just to the tops of the tins before baking at 220C (fan) for 20-30 minutes.