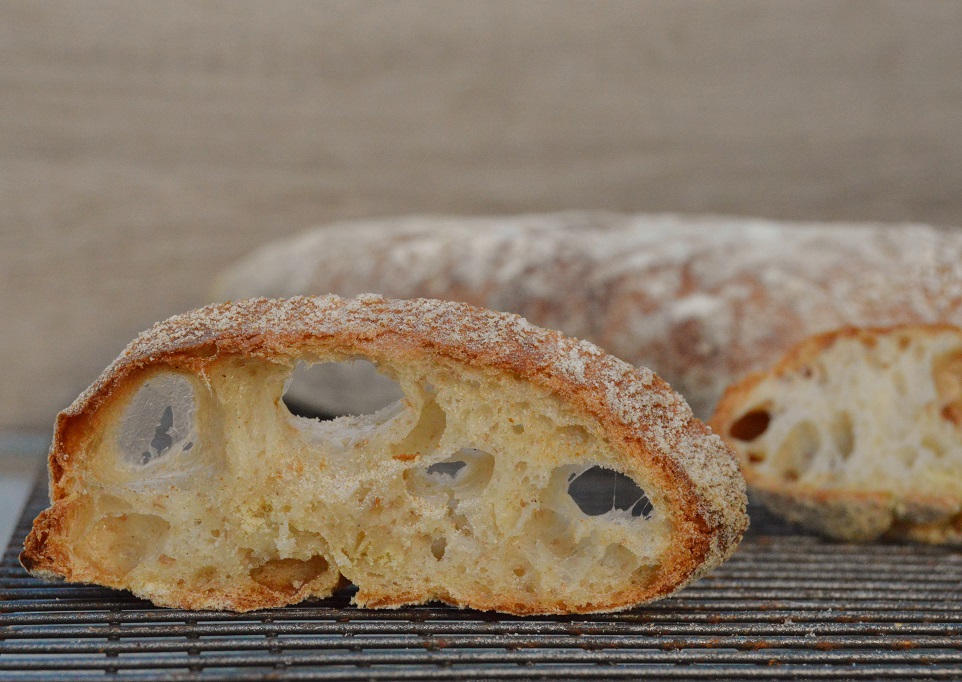 Although I am an unashamed bread addict, I will confess that until fairly recently I have never got excited by ciabatta; I have tried many ciabatta but have never really been blown away by the flavour – and particularly with bread, I like to be blown away!

re-photographed – June 2018
This recipe, however, is a revelation to me in terms of the flavour. It is based on Peter Reinhart’s recipe, but I have added a little rye flour for a slight nutty flavour to the bread and have slightly increased the water content, giving about 85% hydration. Sometimes, though, I take it to 90%. 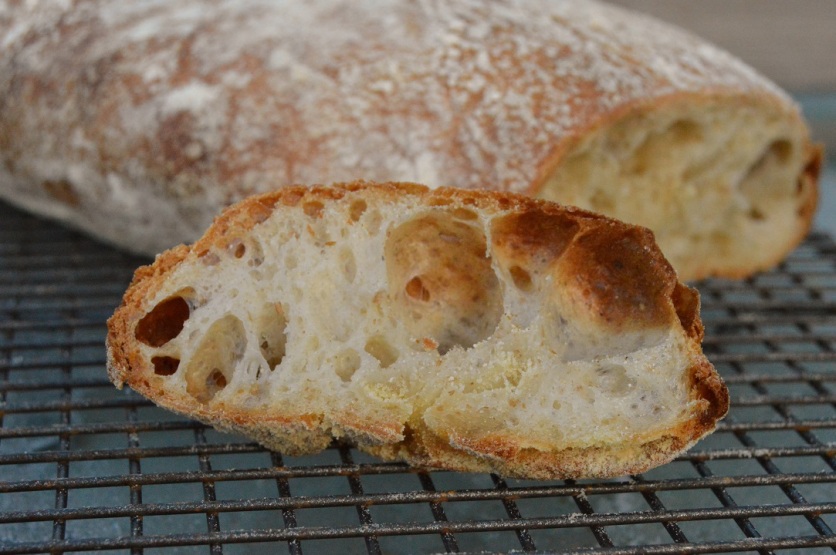 Don’t be put off by the time it take to make this ciabatta: there are actually only a few minutes of hand-on time; the rest is leaving the dough alone to prove. It is about as labour un-intensive as you can get but the trade-off for the time it takes is the most wonderful flavour.

After the very slow fermentation in the fridge, the dough will have risen to about double its original volume before getting shaped.

The risen dough will be very wobbly, but it will keep its structure if you handle it carefully as it gets shaped: well-oiled hands are the key to success here! 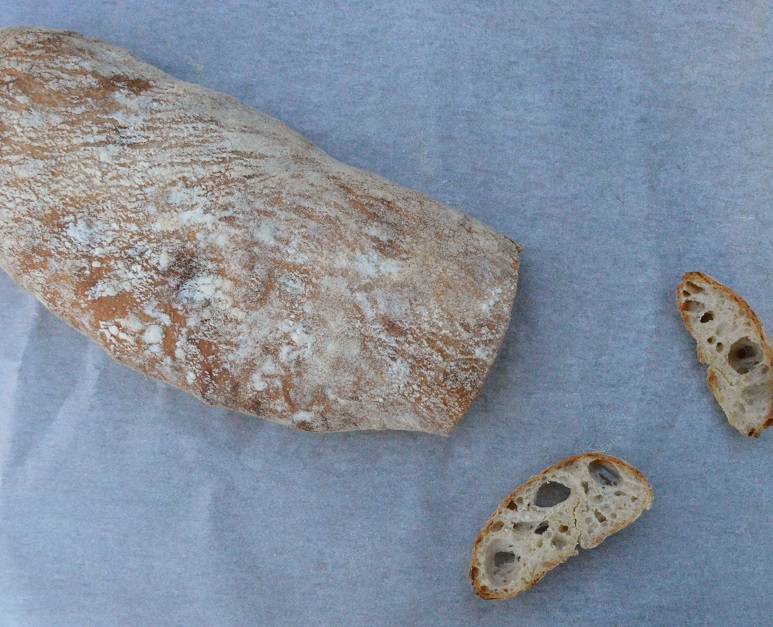 The stages for great ciabatta

With many breads, it is more a test of patience than skill, and while there are several stages here, each stage is very simple and each literally takes moments.

Although there are quicker recipes for ciabatta, this is the one I now stick to purely for the terrific flavour and structure you get. I really cannot urge you strongly enough to go through each of these stages for a truly artisinal bread.

The stages here are: 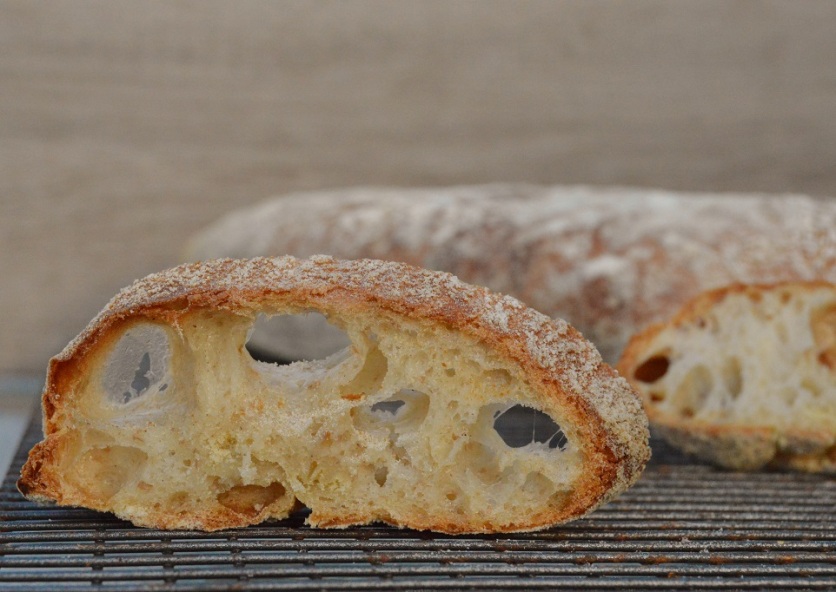 Stretching and folding – where the magic happens!

The stretching and folding simply involves:

Although the initial dough is very lumpy, slack and almost runny, it will become smoother, tighter and more elastic with later stretch and folds: it will end up like jelly but with more structure!

You will also find the dough has strengthened enough that the entire mass of dough lifts out of the bowl in one go, which is precisely what you want.

A taste test: the slow chill or not?

I have baked and tasted this ciabatta both without the slow chill (using 11g easy-blend yeast which is a typical proportion of yeast to flour for many ciabatta recipes, and just a few hours proving), and with the slow chill. In each cade I have got friends to blind-taste.

With each taste test, the dough that had been slow-chilled was rated the better flavoured ciabatta. And the structure was much more open in terms of the holes. 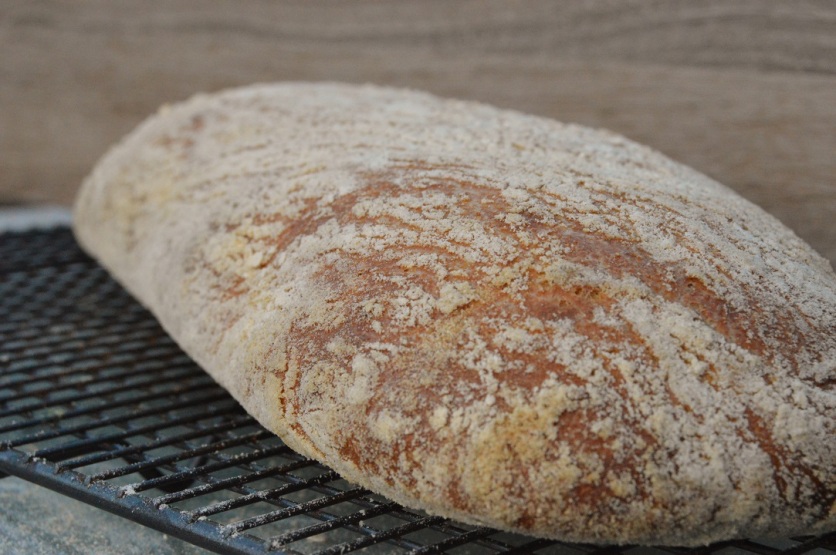 (1) Mix the flours, salt and yeast together in a large bowl. Add the water and the oil and mix well to give a wet, lumpy mass. Leave to stand, uncovered, for about 20 minutes. 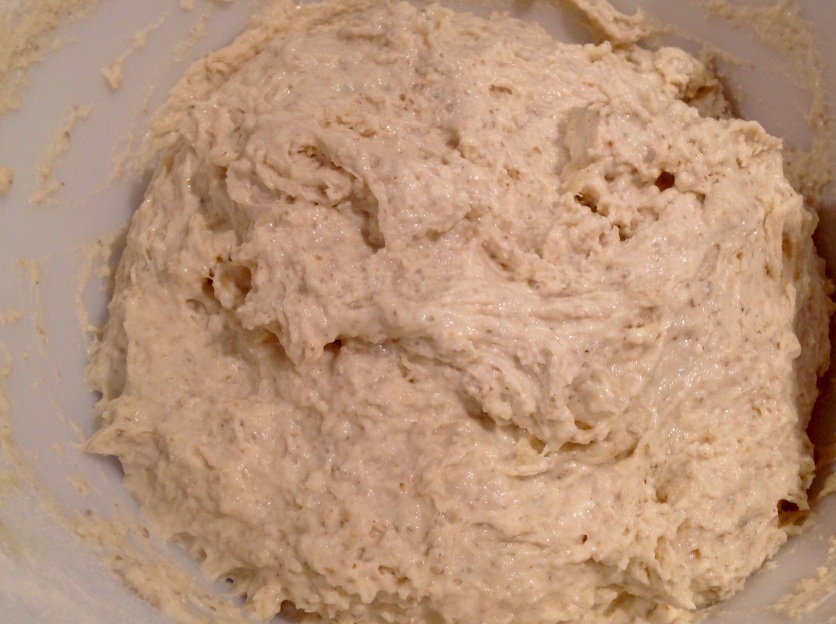 (2) “Stretch and fold” the dough in the bowl for a few moments using oiled hands, and rotating the bowl from time to time: you will feel the dough becoming more resistant and smoother with each stretch. See above. Cover the bowl and leave it to rest for about 20 minutes. Repeat this “stretch and fold” session 3-4 times more, resting the dough in between. 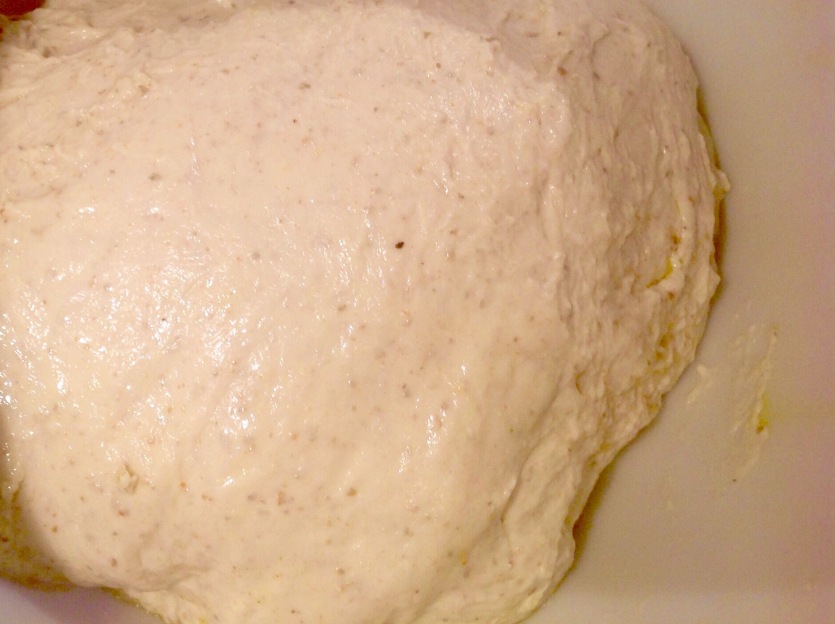 Much smoother after a few stretch and folds

(3) Cover the bowl with clingfilm and chill at least overnight, but ideally for up to a couple of days. Remove from the fridge and leave for an hour so for the dough to start to come to room temperature. Turn the dough onto a well-oiled surface: you will see bubbles forming over the dough. 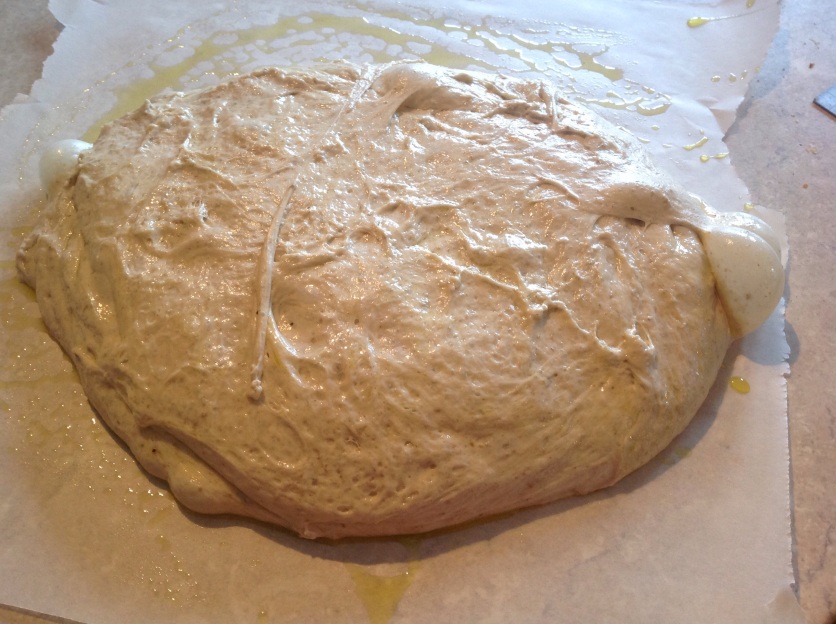 (4) Cut the dough into two pieces and lay each piece over a mixture of flour and semolina. Taking care not to deflate the dough, lightly stretch each piece a little into a rough rectangle.

NB: well-oiled hands, going under the dough with your fingers is easiest: the flour/semolina mixture helps with traction.

For ciabatta rolls, cut off small pieces of the initial dough and shape each into a rough square. 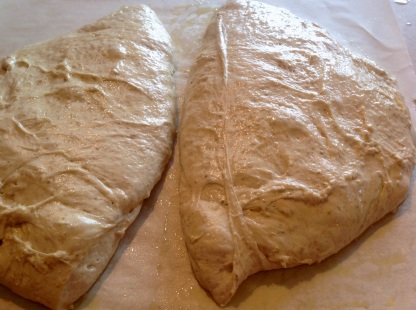 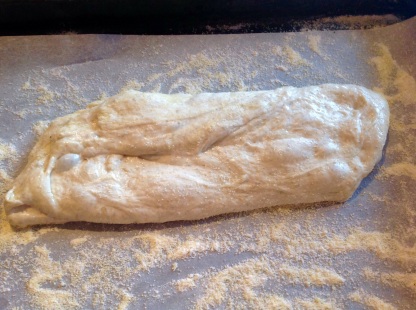 (5) Fold in three (as in diagrams below) and carefully transfer, seam-side down, onto a baking sheet that has been lined with greaseproof and has been well dusted with flour and semolina, Even though it is a soft dough, almost gelatinous in terms of its wobble, it will handle quite easily. 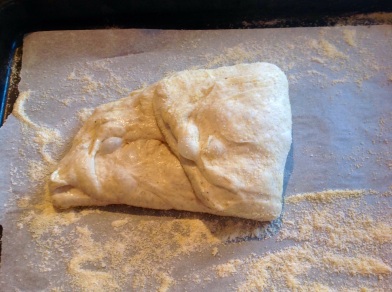 (I) Folding the dough to the middle 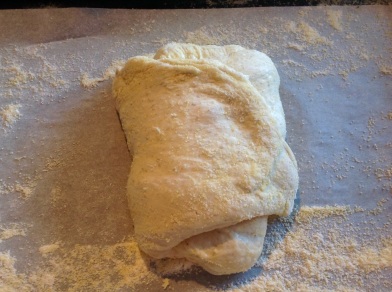 (II) Folding back over 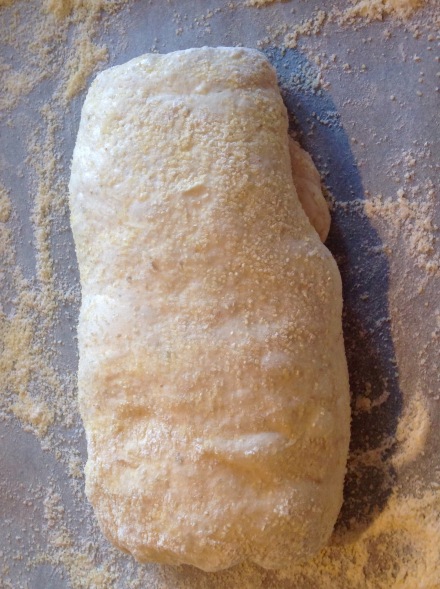 (6) Very gently stretch each piece of the folded dough lengthways and straighten it to form a rough rectangle, placing it near one edge of the greaseproof. It will resist a little as the gluten has developed, but it will still be able to be stretched slightly: just don’t force it. 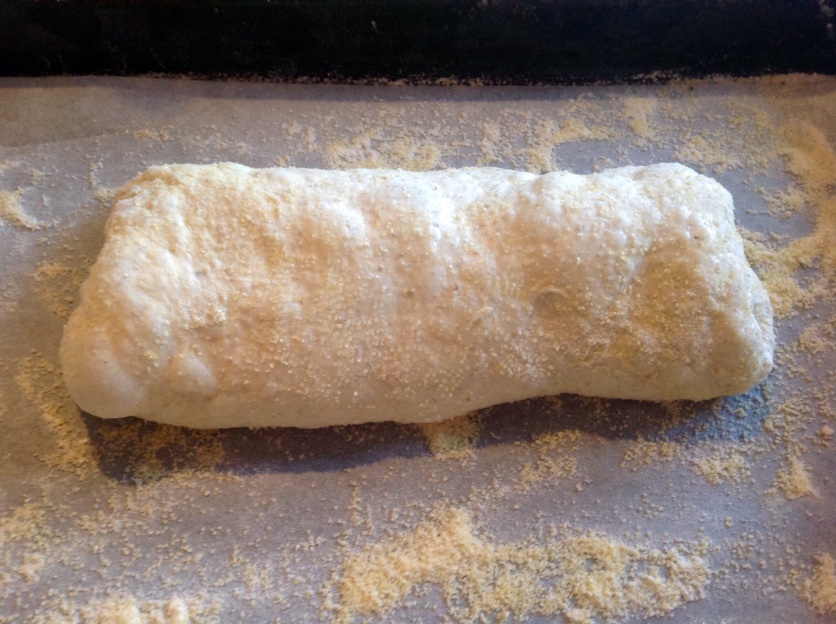 (7) Dust the dough with more flour and semolina, cover loosely with clingfilm and leave for about an hour at room temperature to prove a little.

(8) Gently flip each piece of dough over onto its side: you can simply lift the greaseproof along one edge to help it flop over. It will now look somewhat wrinkled in places: part of its charm! 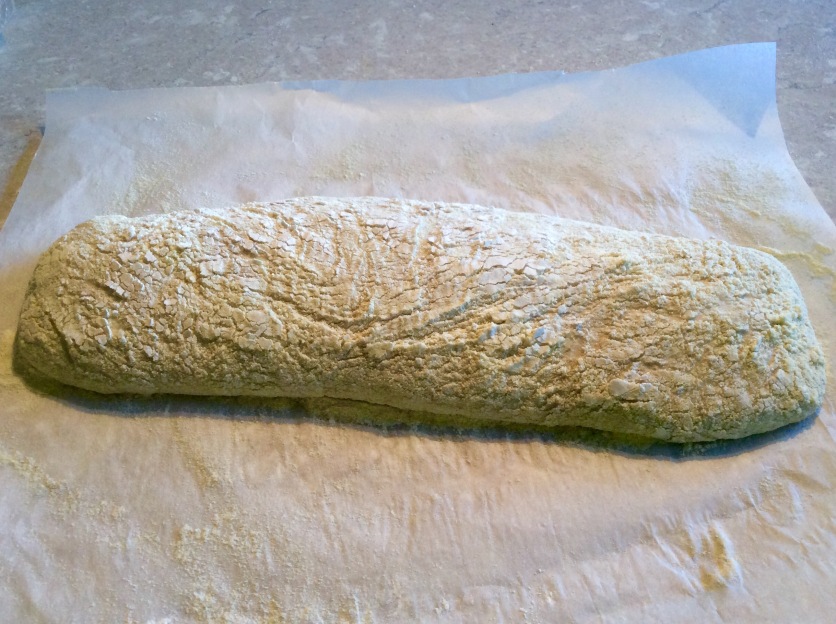 ciabatta shaped and ready to bake

(9) Leave to prove for a final 30 minutes at room temperature: it will have risen a little more at this stage. During this final prove, pre-heat the oven to its highest temperature and place a roasting tin on the bottom of the oven. Place a couple of baking sheets on the shelves to heat up.

(10) When the dough has had its final prove, carefully lift the greaseproof plus dough onto the very hot trays and put towards the top of the oven. Pour cold water onto the baking tray on the bottom of the oven to create steam in the oven.

(11) Turn the oven down to 200C(fan) and bake for 25-30 minutes for large ciabatta or about 15-20 minutes for smaller ones: they should sound hollow underneath when you tap them. Transfer to a wire rack to cool.

2 thoughts on “Ciabatta with a touch of rye”