I do like to take a humble mince pie to a level that is so much more than what commercially is usually just indifferent pastry with a fairly non-descript filling. So I often vary things a little so that the mince pie is that bit more special.

I first had a mince pie with a Viennese biscuit topping several years ago and was quite taken with it: the mince pie simply melted in the mouth beautifully, leaving a lovely spicy, citrussy and sweet kick of the filling. And this is what I have tried to emulate here. Ok, with the “mince pie Christmas tree” picture above, I have taken the nod from many such arrangements that abound, but I do like the look!

Now when I make mince pies I usually go for a shortbread top and bottom, often flavoured with a little cinnamon and a touch of orange zest, but occasionally something like an almond frangipane topping or even a cinnamon crumble topping hits the spot….basically whatever takes my fancy at the time.

A touch of pistachio

This time I went for a pistachio feel, with pistachio shortcrust pastry base and a pistachio Viennese biscuit topping (I love ground nuts in biscuits): the pistachio is not overwhelming, but you get a good hint of that lovely nutty flavour.

The Viennese biscuit dough is very simple to make, and takes seconds, especially if made in the food processor. You can either dollop it on top of the mincemeat roughly, run a fork over the surface for added texture (or not) or pipe it on top.

The filling is just good quality mincemeat, tarted up with extra nuts, brandy and dried macerated cherries: and even a good mincemeat deserves tarting up at Christmas! As I have mentioned in other posts, it is well worth keeping some dried fruit in jars with Amaretto, rum or brandy; they plump up beautifully, taste glorious and are great additions to all manner of bakes. 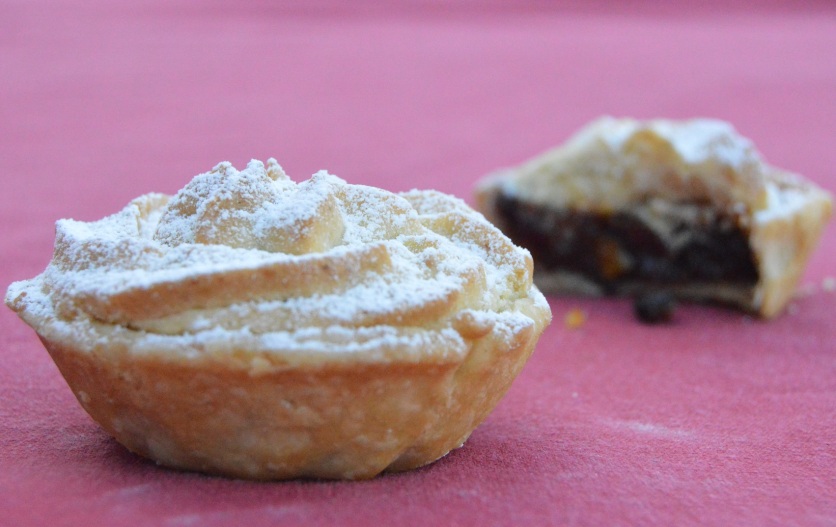 (1) Make the pastry: mix the flour, ground pistachios, icing sugar, salt and orange zest in a bowl. Rub in the lard and the butter until the mixture resembles fine breadcrumbs. Add enough cold water to form a soft but not sticky dough, and knead very lightly to form a ball. Flatten slightly, wrap in clingfilm and chill for at least 30 minutes. Alternatively, freeze for use later.

(2) Roll out the pastry thinly and cut out circles that are large enough to line greased, shallow mince pie tins. Press them gently into place.

(3) Mix the filling ingredients together and place a teaspoon or so into each pastry mould. Any surplus filling can be put back in the jar, with extra brandy if you are not going to use it within a few weeks or so. It also freezes very well!

(4) Make the Viennese biscuit topping: beat the ingredients together until very smooth and at soft-dropping consistency (the mixture drops effortlessly from the spoon back into the bowl). Beat in a little milk if needed. Then either spoon or pipe the mixture onto the mincemeat: you can cover the mincemeat fully or leave some showing.

(5) Bake in the oven at 160C(fan) for 14-15 minutes or until the top is pale golden-brown and firm. Leave to cool in the tins for a few minutes then transfer to a cooling rack. Dust liberally with vanilla icing sugar mixed with a little cinnamon. 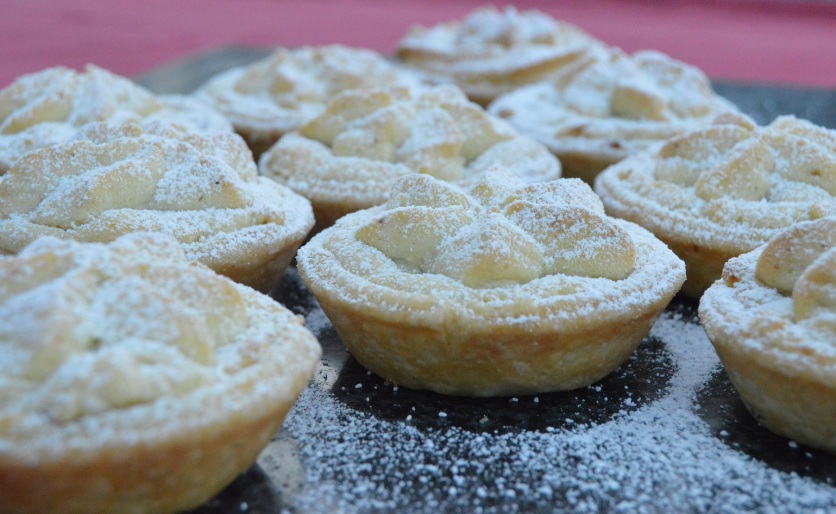