These particular crumpets arose from an idea that came to me late one night – as is often the way!

While I adore crumpets that are toasted and eaten with butter and jam (surely one of life’s foodie pleasures?), I love savoury flavours, and so a batch of cheese and onion crumpets called out loudly to me, begging to be made……

I often make a very quick sourdough crumpet using just active starter, salt and bicarbonate of soda (the recipe link is at the bottom of this post), but for this recipe I used the starter that gets discarded prior to feeding it: it takes a little longer but there is actually little to do and you get a wonderfully deep flavour.

The recipe below is my twist on a standard crumpet recipe. I add puréed cooked onions and just a little mature Cheddar to the batter: you get a subtle cheese flavour here rather than it being too cheesy which gives, I feel, the right balance.

I also added a little ale and mustard in the batter which adds a lovely rarebit flavour. 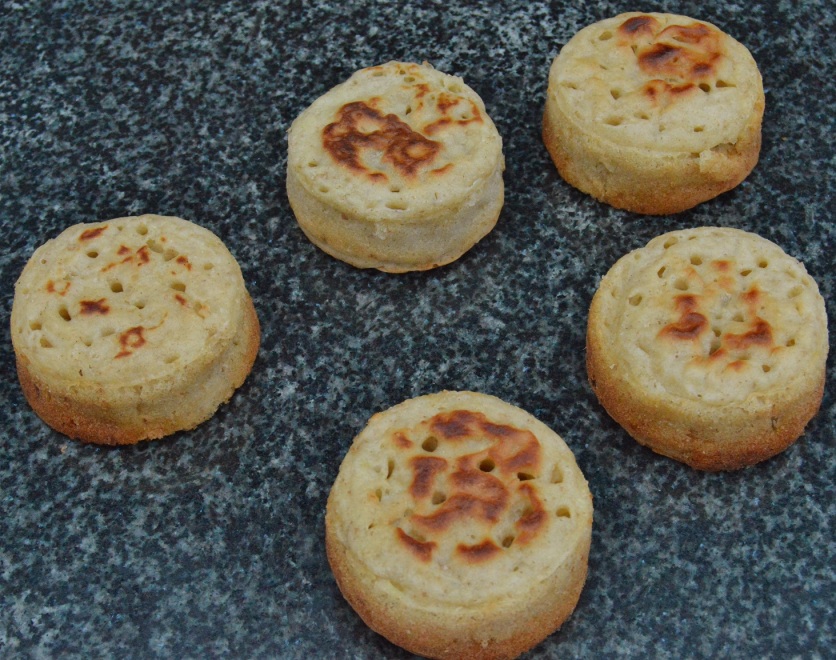 The batter has enough body to hold the cheese and the onions in place, yet results in a light crumpet.

Some recipes call for just strong plain flour, while others call for a mixture of strong plain and ordinary plain flour. I prefer using a mixture with crumpets as you get a nice fluffy interior and, I think, the right level of bounce and “chew”. Using all strong plain works very well, though, and gives a firmer structure. 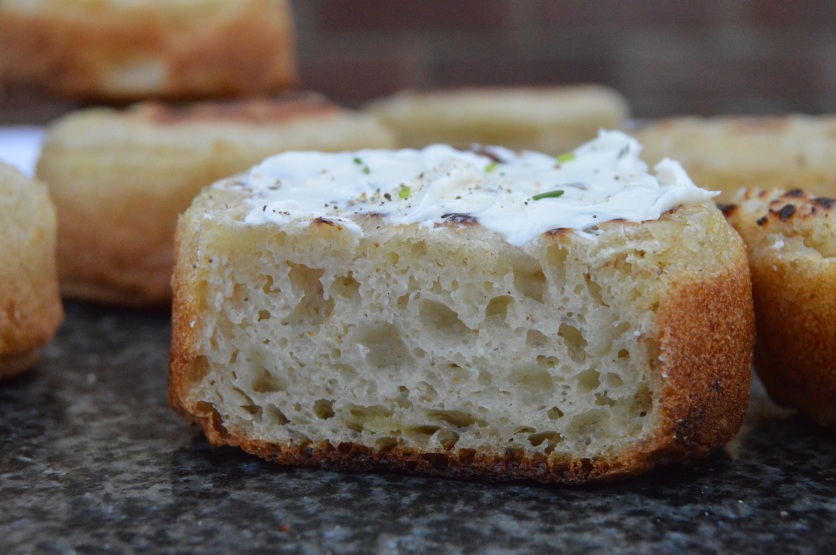 – you need to cook these slowly in a preheated pan and over a low heat: too hot and the bases will burn before the crumpets are anywhere near cooked through. After about 6 minutes the surface will be riddled with air bubbles, some of which will have burst, leaving the characteristic holes you want in a crumpet. After about 12 minutes the surface of the crumpets will be almost fully dry.

– try to not disturb the rings or knock the pan until the tops have bubbled and have started to set. If you do, you might deflate the batter, resulting in doughy rather than airy crumpets.

– I like to turn the crumpets over in their ring after about 12 minutes (or once the tops have set) so that the tops take on a golden-brown tinge, but you can leave the crumpets the same way up throughout the cooking time if you prefer a paler top.

These are best made in well buttered crumpet or other cooking rings, placed on a buttered frying pan or flat griddle. I use 7cm diameter rings. You could instead spoon the batter straight onto the hot pan, to give pikelets: they are the flatter, but no less tasty, cousin of crumpets.

They are also great made miniature as simple canapés, blini-style: for these, drop a teaspoon of the mixture straight into the buttered pan and cook for a few minutes before flipping over and finished for a minute or so.

As with traditional crumpets, these are fabulous served just toasted and very generously buttered. They are also great with a little cream cheese flavoured with freshly chopped chives.

For a great supper or light meal, toast them and top them with crispy bacon and poached eggs, perhaps with a green salad on the side……

The cooked crumpets freeze very well: I like to make up a double batch (it’s particularly wonderful making these on a dreary day) and freeze some of them for a later time.

toasted & then buttered: a perfect treat!

(1) Mix the flours, salt and the mustard powder in a bowl. Add the un-fed starter, the warm milk and all but about a tablespoon of the ale and beat for a few moments to give a thick, smooth batter. Cover and leave for about 6 hours or so in a warm place until very bubbly, or place in a cooler place such as a fridge for longer (overnight for example) if you want to develop a more pronounced sour flavour. 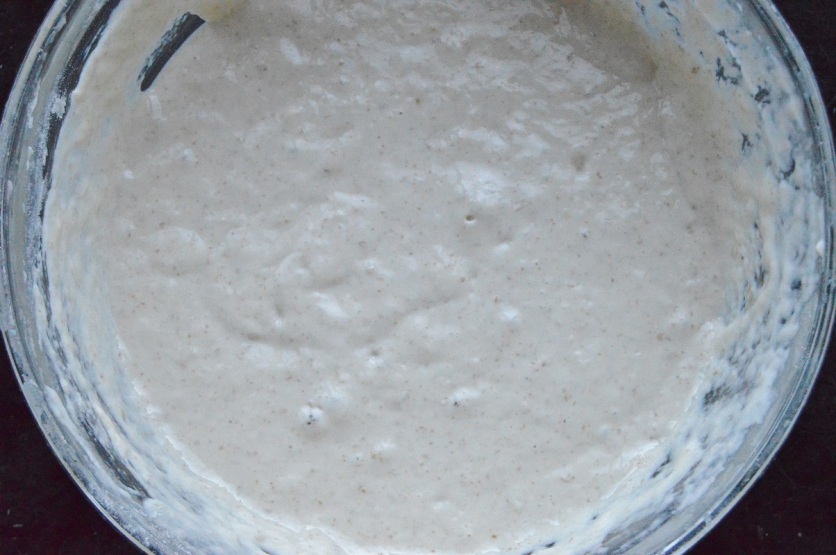 thick batter made up and just starting to bubble

(2) While the batter is fermenting, cook the onions: heat a little oil and add the onions. Sweat gently for about 20 minutes until the onions are very soft and have just taken on a little colour. Cool and then either blitz to a purée or very finely chop/crush.

NB: if the onion chunks are too large, they will weigh down the batter, hampering the level of rise you want.

(3) Mix the bicarbonate of soda with the remaining ale and fold through the batter, along with the onions and the cheese, trying not to knock out all of the bubbles formed during the long fermentation.

NB: you should have a fairly thick batter that drops off a spoon without any effort rather than clings to it or pours too quickly. If the batter is too thick, you won’t get the characteristic holes in the crumpets (but they will still taste fabulous!), so stir in a little more ale if needed.

(4) Cover and leave for about an hour in a warm place, after which time the batter will be very well aerated. It should smell wonderfully fermented and wobble almost like a barely-set jelly!

(6) Without disturbing the batter too much, spoon just over a heaped tablespoon of the batter into each ring: going not much deeper than half full. Keep the heat at low to begin with and don’t shake or knock the pan. The batter will rise and after about 6 minutes bubbles should appear and then burst, followed by more bubbles appearing and bursting: it is a fascinating process  – you could easily pull up a chair and watch all the activity!

bubbles forming and popping on top

(7)  Keep cooking for another 5-10 minutes, at a lower heat, until the surface has dried out and set – and not before, otherwise the crumpets will collapse. NB: patience is the key here – don’t be tempted to turn up the heat to rush things!

tops almost set after about 10 minutes

(8) Carefully turn the crumpets over, still in their rings, and cook for a further 3-4 minutes. It doesn’t matter if the surface of crumpets is not touching the base of the pan as the heat of the pan will ensure the   crumpet could through. The base of the crumpets should have a deep brown colour and feel very crisp: this is precisely what you want and makes a wonderful texture contrast with the softness of the inside of the crumpet.

turned over once set to allow the tops to colour

(9) Remove the crumpets from their rings carefully and serve warm – and with plenty of butter!

Ready to take out of their rings

For quicker sourdough crumpets, taking little more than 30 minutes or so to make from start to finish, click here