Shatteringly crisp potatoes with a very soft, fluffy and nicely seasoned interior are a must with any roast dinner. To be honest, though, I could eat them just on their own!

I cannot think of having a roast dinner without having roast potatoes as one of the side dishes. And I perhaps use the words “side dishes” incorrectly as for me a roast dinner is more about the vegetables than what is often viewed as the centrepiece ie) typically the meat.

Sadly roast potatoes are often done poorly in restaurants and pubs, and the frozen “roast potatoes” that you can buy in supermarkets do not come anywhere close to what a decent roast potato should be; they really should make a loud shattering sound as you break into one and the inside should be like the softed mash potato.

My mini video of a recent batch of roast potatoes shows them cooking and at the end you can see what I mean by the crispness as I break into the tester one…..which is, of course, for me to eat: cook’s perk and all that!!

The video is here.

My tips to get super-crispy potatoes

There are all sorts of tricks that people swear by for crispy roast spuds. But you really don’t need to dust them in flour or semolina to get them crispy and you don’t need to time the cooking precisely to within an inch of their lives. 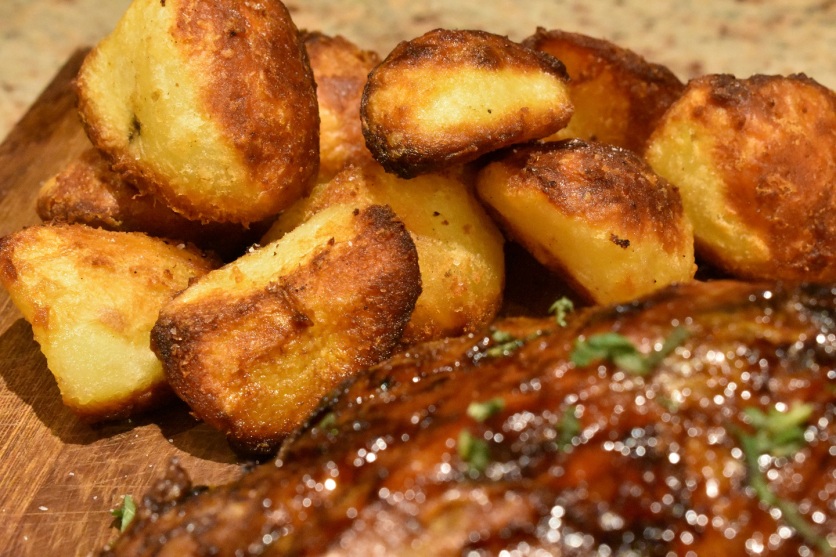 For me the following have always served me very well with roast potatoes:

You need a potato that is quite floury. Either Maris Piper, Desiree or King Edward is be my spud of choice. That said, I have used nameless “white potatoes” from the supermarket and they work well. Sadly, salad potatoes do not work as they do not go soft inside and the “baking potatoes” do not go crisp enough on the outside.

The potato has to be peeled – but do not waste the peelings as they can be soaked in water (to stop them going brown) and used a day or so later for wonderful potato snacks in their own right. My recipe for spiced potato peelings is here.

I vary between using a standard vegetable oil or, if I am feeling extravagant, duck fat. Sometimes I have used lard (or a mixture of lard and oil).

Quite honestly any of these will work brilliantly with each bringing something slightly different to the table: the duck fat add that luscious feeling of contentment in your mouth and over your lips – truly sublime – but using vegetable oil alone will give roast potatoes you can be truly proud of.

Don’t bother using olive oil or flavoured oils as these tend to go acrid at the high cooking temperature.

Metal is the best way to go for the best level of crispness, and you need a large tray so that the potatoes can be spread out so the surface is fully exposed to the heat. It they are too close together, they tend to steam a little where they touch.

Once the potatoes have been peeled and chopped into chunks (small or big), pop them into a large pan of cold water, along with a generous amount of salt. The salt is essential here, otherwise the potatoes will be bland inside – no matter how much salt you sprinkle over them once roasted!

Bring to the boil and simmer for about 5-10 minutes (depending on the size) or until the outsides of the potatoes are starting to soften: I take one as a tester to see.

Drain into a large sieve or colander and give it a gentle shake to ruffle the surface. Set aside until needed.

Top tip: you can do this a day or so before and leave them either in the fridge or at room temperature. As they have been par-boiled, they won’t go brown.

The fat needs to be heated until very hot before adding the par-boiled potatoes. I pop the tray with the fat in it at the top of the oven set to 200C (fan).

Top tip: put the fat in to heat about 10 minutes or so before the meat comes out.  When the meat comes out, whack up the heat in the oven. The longer the meat rests, the better – and it can keep warm for over an hour while the potatoes cook.

Remove the tray of hot fat from the oven and carefully add the potatoes to the hot fat. Use a large spoon to give them a toss in the hot fat, spinkle over some salt and pop back into the oven: still at 200C (fan).

NB: This will ensure the bottoms of the potatoes will take on a deep golden colour and crisp up. If you keep turning them every 5-10 minutes or so, the temperature of the fat will drop and it will take a lot longer for the potatoes to crisp up properly.

After about 20 minutes, turn them over and spoon the hot fat over them again: you can never get enough of the fat for roast potatoes!

Leave them for another 20-30 minutes, depending on the size, or until they are a deep golden-brown colour. You can afford to take them darker than you might think.

Once the potatoes are a deep golden-brown colour, remove the tray from the oven. I then pop a shallow cup or a scrunched up tea-towel under one end of the tray so that it tilts: this allow the fat to run to one end of the pan but you can just leave them in the fat or remove them to a serving tray. They will remain crisp no matter what!

Ideally leave the potatoes for 10 minutes or so while you finish things such as the gravy or other vegetables: they will remain crisp for ages but having them not fully hot gives the best flavour.

Roast potatoes for a recent roast at home

If you want the secrets to perfect Yorkshire Puddings, please check out my recipe and top tips here.